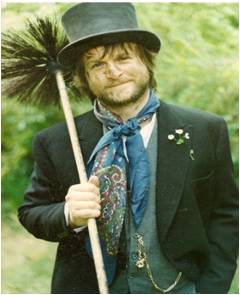 As certified chimney sweeps, we are often asked about blocking chimneys.  Sometimes it’s about a temporary blockage, as the customer is losing heat up the chimney, or because there is a steady rain of particles from an older chimney, (which is due to the old liner crumbling away under the acid attack of decades of acidic flue gasses) or because there is soot falling.

Sweeping the chimney will deal with the last problem, and is the best choice before any attempt to close off the chimney, temporarily or permanently.  Temporary closing of the chimney is often achieved by inserting a chimney balloon into the flue, and removing it after a few months when there has been a steady fall of soot onto it can be a distressing and messy experience when a few months’ worth of falling soot drops into the hearth all in one go.

As well as the temporary methods, like for example, placing a sheet of plywood, aluminium etc in front of the fireplace, there is the more permanent one of installing a wood burning stove.  As certified sweeps in Newmarket we do find a lot of interest in stoves, because of the many advantages they present. Lining the chimney of course prevents debris from old flue linings, and as open fires waste a colossal amount of heat up the chimney, installing a stove will reduce the wasted heat to a very small level, and best of all, when the stove is shut down, there is almost no warm air going up the chimney.  Compare that to an open fore that throws heat away 24/7.

There are of course some people who do intend to block off a chimney for good.  Sometimes that is because that flue is one that serves an upstairs fire that is never going to be used again, and leaks in the flue system of the house are allowing smoke and fumes to get into a bedroom, which can be dangerous.  In those cases, the chimney should be swept, the bottom sealed permanently and the flue filled with a particulate insulation like vermiculite.  Then the top of the flue is sealed against the ingress of rain, and the job is completed.

However, think carefully about closing off a downstairs chimney for good.  The ability to have a solid fuel fire is a real selling point f you ever move house.