We have been sweeping chimneys in Cambridge for over 35 years, and as a Cambridge sweep, we have no small experience in the various flues and their histories. As certified sweeps we are often called upon to give advice, and we have seen the demand for chimney sweeps fall and then rise again as gas became popular, and solid fuel old fashioned, and then as people became more nostalgic for open fires and wood stoves. In the town proper, the oldest chimneys like the inglenook are all but extinct.  Georgian chimneys are rare, (and surprisingly, they are, when you find them, in a better state than most Victorian flues.)

The universities are often a rich source of very old chimneys, but the overwhelming majority of Cambridge chimneys are of Victorian construction. By that we mean flues constructed between 1850 and 1965. These are almost always of very sound design, and function very well, but sadly they were made of unsuitable materials, and suffer very badly from acid attack from the flue gasses.

Georgian chimneys were constructed with lime mortar and were much more durable. The Victorian flues were constructed with bricks and cement, and then lined with cement.  Because cement is calcium hydroxide, a base, it is attacked by the flue gasses which contain sulphuric, sulphurous, nitric, nitrous and carbonic acids to name only the most common. These eat the liner away and then go on to destroy the cement between the bricks. (See our blogs on this subject)

If you walk round Cambridge like a chimney sweep (ie looking constantly at chimneys) you will sooner or later notice the curved chimneys. These are the tall ones that emerge from the roof near the gutter, and then had to be built tall and freestanding to bring their tops above the ridge of the roof. This meant that they were badly exposed to the wind. This caused extra condensation on the side of the chimney that was subject to the prevailing winds, and extra acid attack on the inside of the flue on that side.  The acid attack caused the mortar between the bricks to expand and soften, and this causes the chimney to curve as though it were bent by the wind. These chimneys are sometimes just a stack of bricks with very little holding them together! 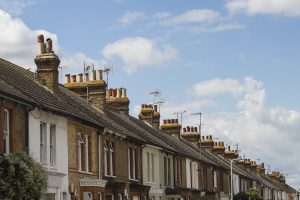