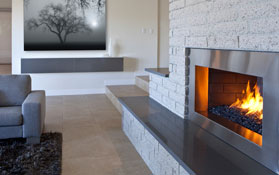 What different types of fuel can I burn?

As chimney sweeps we get a lot of questions as to what people can and should burn in their appliances. A chimney sweep, especially an approved chimney sweep is a good repository for this sort of data. Essentially, we can divide fuel into three groups. Wood, house coal and smokeless fuels.  Smokeless fuels produce little soot, but what they do produce, while it isn’t a huge fire risk is very, very acidic, and if you are burning such fuels, it is advisable to get the chimney sweep in as soon as you have finished fires in the early summer, so that the acidic soot doesn’t sit there and cause a corrosion problem.

House coal produces a soot that is richer, and more prone to causing chimney fires. It also produces more soot than smokeless fuel, so again, get that chimney sweep in once or twice a year, depending on how dirty the flue gets. Wood is a lovely fuel, and to me the best. Not only is it nicer to handle, and cleaner to store and move than coal, it is also carbon neutral, and is very good for the environment.  Woods that are coppiced for firewood are some of the richest natural environments. It does produce soot, and must be burned well, with the appropriate air input, or it can make tar, which is very hard for the chimney sweep to remove.

These mixes do require more sweeping than the least of the mix, ie a wood smokeless mix is dirtier than smokeless, but not as dirty as wood. Personally, I am a purist.  I like to burn wood on its own. Wood and coal have very different styles of burning, and a very different means of control and ash handling. Coal is a slow fuel, it needs to be held up on a grate so that the ash can fall away, and the fire burn as fast as possible. Wood, on the other hand is a fast fuel. If it is held up on a grate, it will burn fast and furious, and be very difficult to control.

This is why coal is burnt on a grate, and wood is burnt on an as a bed, where the logs can choke on their ask and burn more slowly. Burning them together tends to mean that you get the worst out of each fuel. Don’t forge when you ask us out to sweep your chimney that the chimney sweep has all this knowledge at his finger tips, and he will be very pleased to share it with you.